Best Time Of Day To Fish for Bass

What is the best time of day to fish for bass? Find out here.

Largemouth bass are predatory fish with aggressive feeding habits. They can be caught at any time of day, but specific feeding behaviors mean they’re more likely to bite during certain times. Weather and seasons change their habits, but luckily, it’s predictable if you know about the biology that controls the fish.

During Spring, the fish are focused on reproducing by spawning. This behavior drives their feeding and location choices and changes throughout the phases of the spawn.

Spring is considered the best time for bass fishing, but your technique should change as the spawn progresses.

The first phase of spawn is the pre-spawn and it occurs when the water temperature reaches 45-50 degrees.

The bass move from deep water to more shallow areas to reproduce. This is generally the best time of year for bass fishing, although the best months to bass fish vary from area to area based on climate.

During this time, it is best to fish during midday, when the water temperature is highest. It is best to focus on creek channels, ditches, or drains because the fish will use these as routes from deep water to shallow feeding areas.

The next phase is the actual spawn.

The fish move to “beds” in shallow water with plenty of cover. This phase happens after the first full moon when the water temperature is over 50 degrees.

Nocturnal activity increases during this time so the best time to fish is at night. The fish can see better under fuller moons and there will be a lot of bass moving to shallow water.

Bass are extremely defensive during the spawn and will attack almost any bait dropped in front of them. After females lay their eggs, they need to eat so this is the best time to fish for some monsters.

When the bass spawn is ending, bluegill and shad spawns are beginning. The bass are starving from the stress of spawning and generally go to these baitfish as food sources.

The water continues to heat up towards the summer temperatures, so the bass begin to migrate back to deeper water. The best areas to focus on are the baitfish beds using similar colored baits.

Most feeding during this time takes place during the early morning hours and late evening. This is the best time to go bass fishing during the post-spawn “season”.

During summer, as the water heats up, the amount of oxygen in the fishery to sustain the fish lowers. This means the bass can either move to cooler water found at lower depths or to shallow water full of oxygen-producing vegetation.

The oxygen-producing vegetation also creates shade that leads to pockets that are lower temperature than the surrounding water so bass may gather there, especially if it’s close to a drop-off. A heavy jig could break through the cover and put your bait right in front of the fish.

During fall, the water temperature begins to drop again. This causes bass to come out of the deeper water and back into shallow areas to feed. They are generally more aggressive than during summer months and again feed on baitfish.

During fall, larger bodies of water will turnover and normalize the water temperature and oxygen levels for the entire body. This happens when the surface temperature drops below 50 degrees and becomes denser than the water below it. This can halt fishing opportunities while the turnover occurs, as the fish change from early fall to late fall patterns.

While the water is warmer than during spawn, the best time to fish is still during early morning or late evening hours because the bass are more likely to be feeding in shallow water.

During the winter, bass migrate to deeper water just like during the summer. These areas become the warmest area in the fishery, so the fish tend to stay there. During warm times of day, the bass can move to shallower water to feed.

The best time of day to fish during the winter is during midday when the water is warmest. The bass will hunt for bluegill or shad during this time. The best areas to target during this time is steep drop-offs because the bass can easily transition from deep to shallow water.

Baits that mimic shad will work best but the bass are extremely lethargic during winter months.

In warmer climates like the southern United States, the water temperature remains higher, so the bass have a less extreme response. This means that either winter or spring/fall techniques could be successful, although the fish will generally still stay in deeper areas.

In these warmer climates, a water temperature of 50-60 degrees can occur and provide the most ideal conditions for bass. The fish will still bite when the temperature drops towards 40 degrees but they’re less likely to chase your lures. Under 40 degrees will usually be inactive and the lure will need to be dropped right in front of them.

Bass are most active when the water temperature is 50-60 degrees, closest to spawning conditions. The time of day this water temperature happens varies throughout the year as well as the areas where bass stay. Using the appropriate bass rod and bait for the season will maximize your chance for catching a fish.

Written by Dale Shetler
Founder & Editor-in-Chief
Updated October 4, 2022
Dale Shetler is a vetted fishing expert who has been fishing for over 20 years. Apart from working as a sonar technician and commercial fisherman, Shetler has a degree in marine biology from Samford University.
Share this article:
Become a Fishing Insider
Join our newsletter to get exclusive discounts, expert guides and more.
Don't worry, we don't spam. 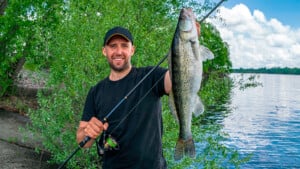 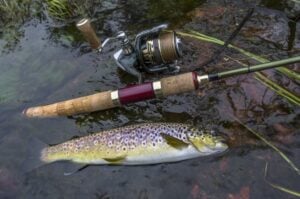 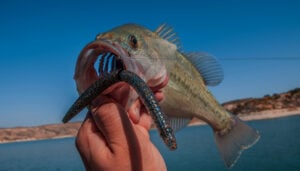 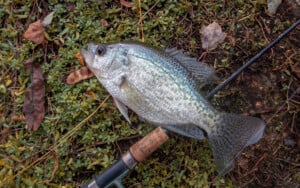